Everyone knows that Deep Sea Fishing Season in Hawaii is year round. However, we are once again approaching those much anticipated months where it is the beginning of PEAK season. Can you think of any better place to embark on your fishing adventure than off of the breathtaking Hawaiian Islands? Whether you’re an experienced angler or just looking for something fun to do for the day, nothing beats the thrill of big game fishing and a day out at sea. In the upcoming month of May there will be no shortage of fish. It is peak season for just about every fish imaginable, both Blue and Striped Marlin, Spearfish, Dolphin (Mahi Mahi), Wahoo (Ono), Yellowfin Tuna (Ahi) you name it!

Recently HawaiiDeepSeaFishing boats have been making headlines with their colossal catches. Last month it was a giant 823-pound marlin caught off the southern coast of Oahu on Sportfishing boat Play n Hooky. In addition, just last week over in Lahaina, Maui Sportfishing boat Start Me Up got into the action as well securing a 661.5-pound big blue. The monster of a fish was ultimately lured in by Brad Schafer. He was fishing alongside Captain Randy Evans and deckman Jeremy Johnson. From left, Brad Schafer, Capt. Randy Evans and Deckman Jeremy Johnson with their 661.5-pound marlin caught on Start Me Up.

Start Me Up promotes a “Catch a 500+lb. Marlin & Your Trip is Free” guarantee, and will also make a $300 donation to a Maui charity. Nevertheless, for catching the 600+ pound beast, Start Me Up gave Brad his trip for free and donated $300 to Habitat for Humanity. Bake or Grill your marlin with some Aloha Spirit! Try this easy recipe with the next big Marlin you catch

Mix all the ingredients for the marinade.

Marinate the marlin steaks in a glass dish in the refrigarator for 2 hours.

Preheat the barbecue to medium heat.

Place marlin on a sheet of aluminium foil or in a fish broiler.

Cook the fish for 3 to 4 minutes on each side. 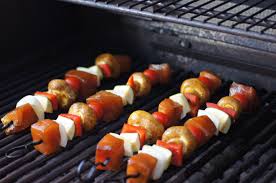 1. Combine basil, oil, lemon juice, garlic, and salt in blender or food processor. Process until smooth. The result should be a brushable sauce - add 1 Tbsp water if too thick
2. Alternate fish and vegetables on skewers. Brush on all sides with sauce
3. Place on a hot grill and cook until fish flakes easily, about 5 minutes each side

If you're in Hawaii on our Nations Birthday we have compiled a list of firework shows for you that you could attend after that successful day of fishing!

Ala Moana Beach Park
8:30 p.m. fireworks (preview)
Tune into KSSK for the soundtrack

Located about 10 minutes from the heart of Waikiki sits Kewalo Basin Harbor. Kewalo has a history rooted in the art of fishing, and was traditionally the heart of a bustling fishing village in Kaka‘ako. On June 10, 1970, the largest marlin caught rod-and-reel in the world was caught by Captain Cornelius Choy off of Kewalo Harbor, weighing in at 1,805 pounds. The marlin was dubbed “Choy’s Monster” and continues to hold the record today. In honor of Choy’s Monster, Kewalo Harbor introduces the Kewalo Harbor Big Fish Chase. The base entry will be split evenly among the largest marlin, ahi, ono and mahimahi and the guaranteed $10,000 purse is split amongst the largest marlin, ahi, ono, and mahimahi. First Grander of the year!

Congratulations to angler Kai Rizzuto, Captain McGrew Rice & first mate Carlton Arai for bringing in the first grander of the year aboard the Ihu Nui. The blue marlin weighed 1058 pounds.