Blue Marlin of the Pacific

Blue marlin are distributed throughout the tropical and subtropical waters of the Atlantic, Indian, and Pacific Oceans. A bluewater fish that spends the majority of its life in the open sea far from land, the blue marlin preys on a wide variety of marine organisms, mostly near the surface. It uses its bill to stun, injure, or kill while knifing through a school of fish or other prey, then returns to eat the injured or stunned fish.

Marlin is a popular game fish with a relatively high fat content. The biggest females are more than four times as heavy as the biggest males, which rarely exceed 350 lb in weight. The longest females can reach a length of 16 ft with the bill, constituting about 20% of the total body length - making their body mass about 1,190 to 1,810 lb. 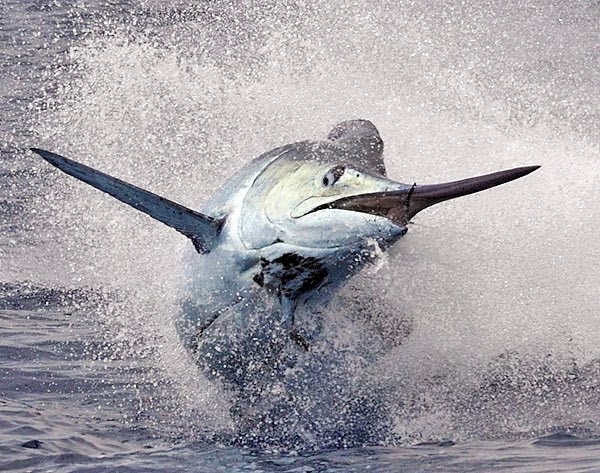 Blue marlin, like other billfish, can rapidly change color. However, the body is most often blue-black on top with a silvery white underside. It has about 15 rows of pale, cobalt-colored stripes, each of which has round dots and/or thin bars, located on both sides of the fish. The body is covered with thick, bony, elongated scales 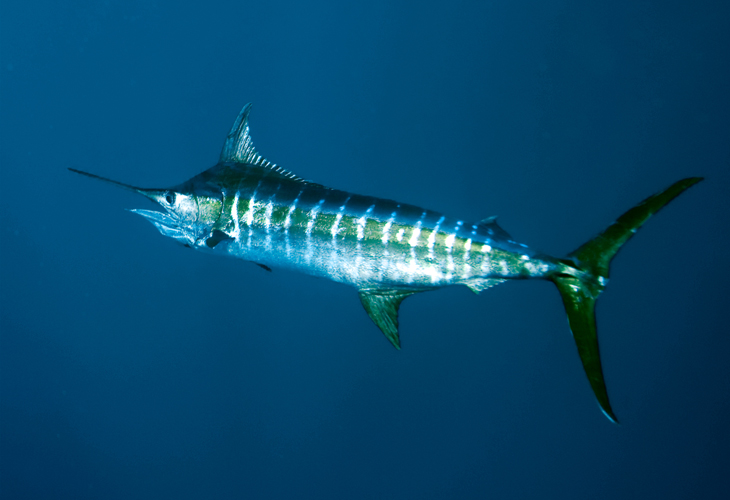 The bill is long and stout. Both the jaws and the roof of the mouth are covered with small, file-like teeth. The nerves in the mouth are so sensative, they can feel weak water motions and large changes in pressure.

Blue marlin are found year-round in tropical oceanic waters of the Atlantic and Indo-Pacific. The range expands into temperate waters of the Northern and Southern Hemispheres during the warmer months and contracts towards the Equator during colder months.

Once blue marlin reach maturity, they have few predators, with the most important probably being large pelagic sharks such as the shortfin mako and great white shark. Other potential predators include toothed whales such as the false killer whale and killer whale.