Haleakala National Park, or the “house of the sun,” is home to endangered species, volcanic landscapes and sub-tropical rainforests filled with secluded hiking trails that lead visitors through this exotic location. Hikers can bring a picnic breakfast and hunker down for the colorful display of light that spreads across the valley. It can be chilly, sometimes below freezing, before sunrise at the top of this 10,023-foot dormant volcano, so prepare with plenty of layers. Sunscreen is also recommended if you plan to stick around for a hike through the volcanic landscape. There is no food, beverages or gasoline in the park, so be prepared. If the volcano isn’t of much interest, the coast is a beautiful spot as well

The name of this mile-long, white sand beach means “heavenly sea,” and after you visit, you’ll see why. Its calm waters are perfect for swimming and wading in the water without having to worry about the waves. The beach gives visitors a great view of the nearby Mokulua Islands. Keep in mind that the best part of this beach is found before Onekea Drive, so be sure to park in that neighborhood and take a trail to the beach.

Known as Maui’s “signature beach,” Kaanapali was named one of the best beaches in 2003 and offers three miles of white sand, perfect for a romantic walk. Once a retreat for the wealthy, Kaanapali is now a public getaway. This location is best known for Puu Kekaa or the Black Rock. It’s an area well-known for snorkeling, with the water ranging from about eight to 25 feet deep, depending on the slant of the lava rock under the water. The water is fairly clear, even in deeper areas, and turtles are often found frequenting this spot. Linger with your loved one after the rest of the observers leave, and admire the sun as it appears to melt into the ocean.One aspect that makes Kaanapali even more unique and romantic is the cliff diving ceremony that takes place at sunset each day. The act of the dive, accompanied by the lighting of torches that line the cliff, is in honor of Maui’s King Kahekili 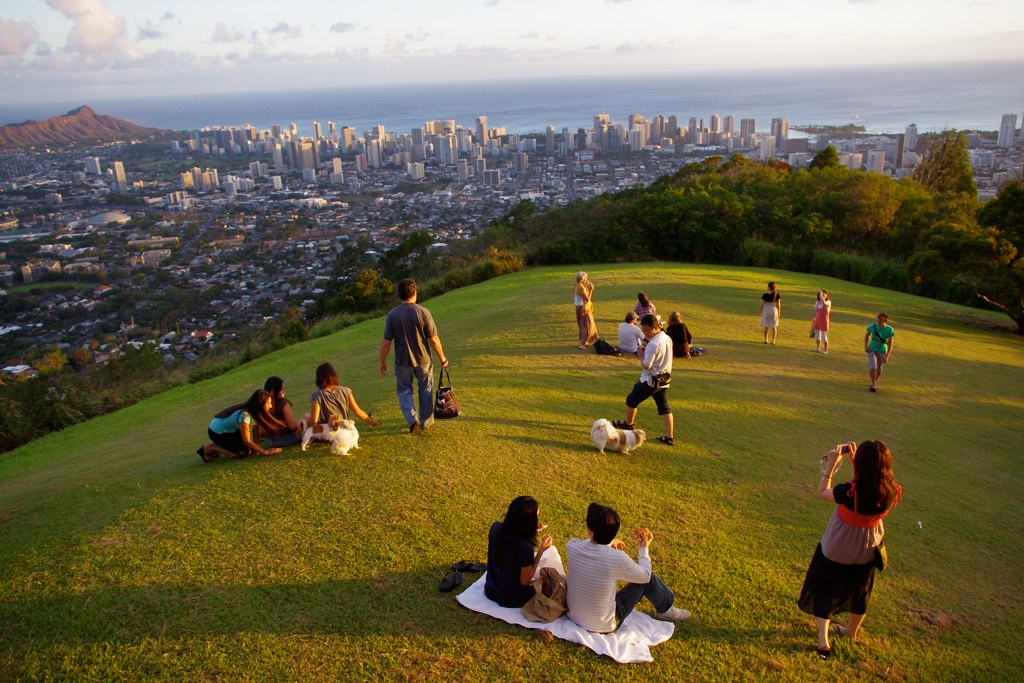 A one-mile loop trail leads to a lookout at Puu Ualakaa State Park where visitors can view southern Oahu. This spot is known for romantic sunset picnics while onlookers admire the views of Diamond Head and Pearl Harbor. Even Honolulu and Monoa Valley can be seen from this height, which sits on top of a cinder cone near downtown Honolulu.The trail leads through a wooded area, and the leisurely walk will take visitors up to the top of the hill that overlooks the city below. Let the backdrop of the forest and the bustling city be the perfect, romantic sunset location

This seaside town on the coast of Kona is an ideal spot to watch the sunset. A historic fishing village, this coast is now a destination for shopping, restaurants, and those who want to get away from the bustle of life.

The Na Pali Coast of Kauai.

One of the most beautiful places in the world, the Na Pali Coast of Kauai is home to waterfalls, beautiful green mountains, and a breathtaking coastline. The pali, or cliffs, are a backdrop of rugged valleys that suddenly end once they reach the ocean. The valleys are dotted with waterfalls and streams that continue to cut into the terrain. Stone terraces where Hawaiians once lived can still be found on extensive hikes. A large state park here is made up of these beautiful landscapes for all to enjoy. Many plants that once thrived on the island are considered endangered. Because of that, there are no roads in this area.

Maniniowali Beach at Kua Bay on the Big Island. Watch out for powerful waves in this location, but be ready to be swept away by the beautiful views of the ocean and romantic atmosphere. The drive to the beach, once only accessible by a dirt path, was paved in recent years. While it’s easier to get to, it’s still not widely known and can provide a quiet, secluded location. Sit on the lava rocks and keep an eye out for turtle and dolphin sightings, a common occurrence at this spot. Packing a picnic lunch is also a good idea. Recently installed showers and bathrooms near the parking lot make it easy to spend a few hours on the beach.

Home to condos and resorts, Sugar Beach, also known as Kealia Beach, is said to be one of the longest beaches in Maui. You won’t find any buildings on this beach, making it a perfect spot for romance. It can be a bit windy here, though, so it’s a favorite spot for kite flying and kayakers that often push off from the shore.

Known as one of the best snorkeling beaches in Hawaii, Kuilima Cove in Oahu is surrounded by secluded locations, including Turtle Bay and Waimea Bay along the north shore of the island. One of the lesser known beaches, it’s maintained by a nearby hotel, so you’ll find it’s well kept and beautiful.

The Waipi’o Valley on the Big Island.

Known as the Valley of the Kings, The Waipi’o Valley on Hawaii’s Big Island holds a deep history. Ancient royals of Hawaii were buried in this area. Cliffs can be seen in the distance with valleys filled with some of the most beautiful waterfalls you can see in Hawaii.